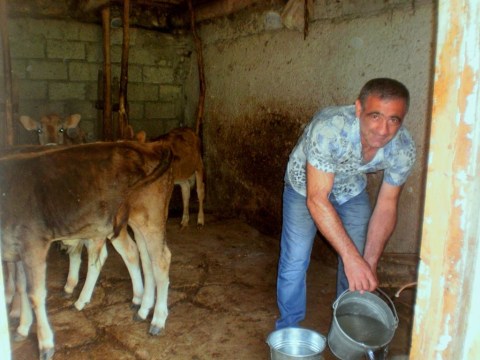 A loan helped To buy ten bee hives for a new beekeeping business, and some animal fodder for the cows.

Artak lives in the very nice city of Ijevan, with his retired parents, his wife, and their two daughters, who are still school-aged. For many years Artak has worked at the Ijevan Forestry as a forester, and simultaneously, he and his parents are engaged in farming and agriculture. Nevertheless, the income from both his forestry job and farming is not enough for his family's needs. That is why Artak periodically goes to the Russian Federation for work abroad, because he needs to somehow enlarge his family income. In his farm, Artak cares for six cows, four heifers, five calves and twenty-five chickens. He also, together with his parents, cultivates their plot of land. They raise vegetables, and fruit and nut trees (e.g., apple, pear, plum, and hazelnut). They perfectly manage to sell products of their farm, including dairy products, eggs and fruits. With the income earned by farming, Artak has already bought some furniture for the house. Now Artak wants to start a beekeeping business. Therefore, he asks for a loan, with which he will buy ten bee hives and some animal fodder. He hopes very much that this loan will surely enlarge his family income, and improve their living conditions.