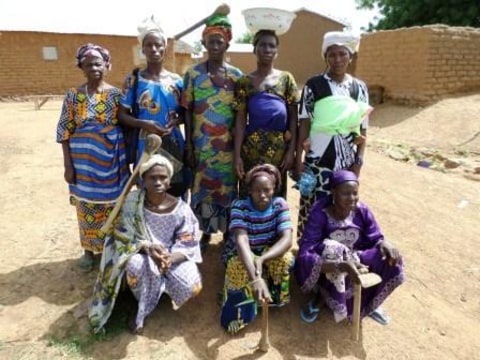 A loan helped To buy groundnut kernels, fertilizers, herbicides and use men to do the plowing and weeding.

Mostly married in large traditional families with an average of 39 years of age and five children, the members of the Benkan 1 group all live in the village of Kenioro in the Koulikoro region (second administrative region of Mali) and became acquainted through family, marriage and neighborhood ties. To recruit the youth association to cultivate their field and ensure agricultural inputs are available at the beginning of the rainy season, they turned to Soro Yiriwaso and are in their third seasonal loan cycle. The group will grow rice and groundnuts. Mrs. Natène (the woman standing at the far left in the photo) is a major groundnut producer in the village. She plans to use the loan to buy four bags of fertilizer consisting of urea and a mixture of grains, one liter of herbicide, 50 kgs of groundnut kernels, and hire the village youth association to perform plowing and weeding. She gets her agricultural inputs in Siby. With an area of ​​1.50 ha (3.7 acres) she hopes to harvest 40 bags of groundnuts and 5 bags of rice. Part of the production is sold to ensure household daily needs and the rest is used for family consumption.