Your donation helps cover Kiva's costs. Give today and make tomorrow even better. Why donate? → 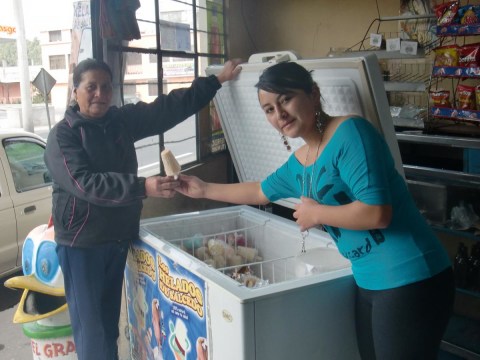 A loan helped to do some repairs on her home.

Belén is a 21-year-old young woman. She is single and works very hard in order to pay for her university studies. Belén's dream is to become a professional businesswoman. She lived in a city that was devastated by volcanic eruptions. As a result, the local economy has suffered from a drop in tourism. That is why Belén decided to move to the canton of Salcedo, where she currently lives. Salcedo is located in the Oriente de Cotopaxi, one of the most important provinces in the mountain region of Ecuador. In Salcedo, there are many tourist attractions such as lakes, hot springs, and extreme sports for adventure tourists. However, the principal economic activity in this town is agriculture and (to a smaller extent) livestock. The most abundant crops include peas, beans, lentils, and other fruits and vegetables. Milk and dairy products are also produced for local markets and the excess processed items are sent to the coastal region. This is a good region for raising livestock due to the favorable climate the canton enjoys. Despite this productivity, there are some very concerning illiteracy and poverty rates. Many basic needs are not met. For example, the sewage system only reaches 25% of homes in the area. One of the typical foods of the city are the "Salcedo ice creams", products that have a great history and have been sold for over 60 years. The recipe was discovered in the convent of some Franciscan nuns who desired better days for the community. For this reason, the first name for the dessert was "the nuns' ice cream" and was sold only from the convent. However, demand grew so high that they began to sell the ice cream in the streets, which created jobs for the people of the town. Finally, various families learned the now famous recipe, which is recognized throughout the country and internationally. Each year, about 80,000 units are exported to various countries. Belén knows the history by heart because she worked at a site that sells the Salcedo ice cream. A year ago, she opened her own ice cream shop from which she also sells groceries and sweets. This is a great help to her because her store is located in a strategic place in the center of the city where many tourists pass by. Belén works five hours each day at her store because she also attends classes and has homework from the university. Belén is requesting a loan to do some repairs on her home, which is deteriorating and is a daily nuisance. Although Belén has not had the opportunity to attend the trainings that Fundación Alternativa offers, she enjoys the support and advice this institution provides to help her grow. She thinks the support Kiva offers to small businesses and business owners all over the world is very important. She is motivated to fulfill all of her obligations because, in this way, not only she but also her country will make a good impression on the world.