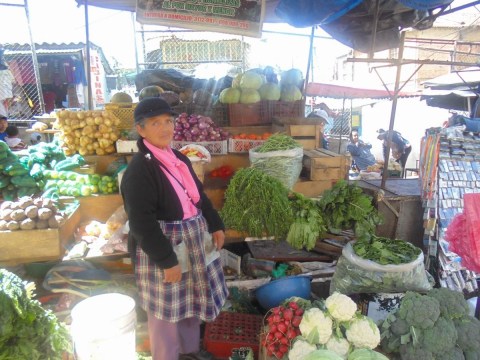 Martha Maria Diocelina's loan finished fundraising, but these other borrowers need your support

A loan helped to expand her food stall.

Martha is a 63-year-old woman. She grew up in the country with her family. Her father always made her participate and help in the family business in the local market. Martha married very young, and from her marriage came her children, who are now independent of her after a difficult but inevitable parting. She had to educate them by herself and sometimes did not have enough to eat, but her effort was worth it and they have learnt to fend for themselves. When Martha married, she moved to Quito, the capital of Ecuador, and she currently lives there with one of her daughters in the neighbourhood called “Chillogallo” in the southern part of the city. This area was not counted among the strong economic areas of the capital of the Republic of Ecuador until recently, but it is now considered an economic force in the capital. It is here that you can find enterprising families who have fought to get ahead. It has been the meeting point between inhabitants of various provinces, natives, and immigrants from other cities and countries. It has been rebuilt to have wide streets. The high commercial activity of this area is constantly strengthening and it contributes greatly to the economic growth of the city. There are also large parks in this zone, where families meet during the weekend. There is great accessibility to all types of services and the inhabitants are enterprising and take every opportunity that presents itself to establish new businesses. Martha has always made a living by selling fruit and vegetables; however, five years ago she found a place in a local market, where she sells her produce on market days (Tuesday, Friday, and Saturday). This has increased her sales but it requires more effort on her part. At her age transporting the packages full of fruit and vegetables is more complicated, and she must take special care of her health. Martha uses the knowledge she learnt in primary school to run her business. She invests several hours each day in making orders to her suppliers and making sales, and more time on market days. She has recently noticed a lack of variety in her produce and that many of her clients have to complete their shopping at other stalls in the market. For this reason, Martha has requested a loan with the goal of investing in new products and expanding her business, thereby enabling her to obtain additional money in order to get a larger place in the market. Martha states that many times this dream was not possible due to the lack of capital and because of the difficulties and obstacles financial institutions put in place. With Fundación Alternativa, Martha found the support for her microbusiness in such a way that she felt important for both being the account executor and to the entity. She agreed to apply to Kiva so that she could also feel the support of various people around the world who still believe in the dreams and efforts of people in the “micro” sector.