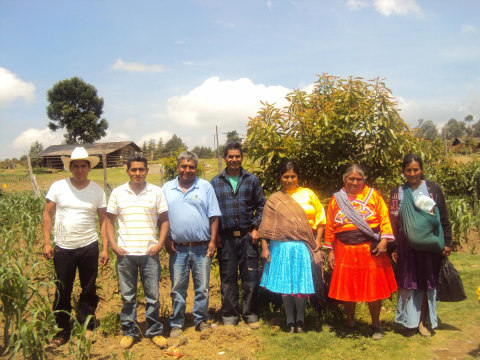 El Rincon Group's loan finished fundraising, but these other borrowers need your support

A loan helped to purchase fruit and vegetables in season.

Jose Juan is a hard worker and lives in Mazahua. He works in the sale of fruits and vegetables in Mexico City. He has a place in the center of the grocery store. He says that he works Monday through Friday and Friday night he returns to his neighborhood. His father helps him to sell on Saturday and Sunday. He says that he learned the business from his father because he did not earn enough as a laborer that his father would take him to work in the storefront in Mexico. Eight years ago he become independent which had taken time because he wanted to earn his own income and also because he was young and had to support his family. He made them a small house to live in. He says that with a lot of effort he has been able to get his family ahead. He has two children who are studying and he wants them to have a career because working as a salesman is very difficult. He is requesting a loan to purchase fruit and vegetables that are in season in the central grocery store to resell them at his store. He says that thanks to VisionFund his business has grown. Jose Juan had to stop working for a time because he had a motorcycle accident and had a foot fracture. It was impossible for him to travel to complete his payments. Now that he is well he wants to supply more fruit at a good quality to sell more because his clients search for quality at low prices. The other members of the group are: Gonzalo, Silvino, Ausencio, Camila, Albina, Eliseo and María Carmen. They invest in their business such as the growing of avocado, to purchase supplies to improve garden and to purchase fruit and vegetables in season, and the purchase and breading of sheep.