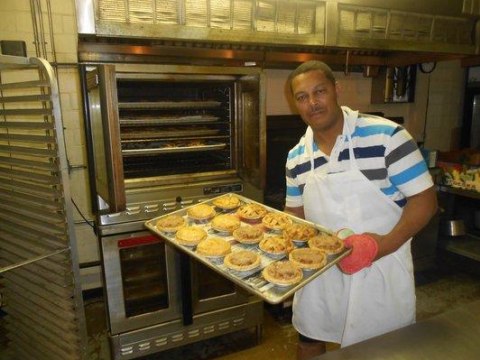 Aaron's loan finished fundraising, but these other borrowers need your support

A loan helped to purchase additional equipment for his kitchen in the new restaurant, lease a new property, and retain three jobs.

Aaron, originally from New Orleans, has been in the Cajun pie business for over 21 years baking personal-size, creole-filled pies. Before Hurricane Katrina, the hurricane that killed at least 1,330 people, injured thousands, and left cities of people homeless including Aaron and his family, his New Orleans business served more than 30 restaurants and many prominent individuals, including political leaders and celebrities. After Katrina, they were forced to move to Atlanta to start their new life. It was not long until they moved back to New Orleans to sell their pies, but it wasn’t the same. Many customers and businesses that were once dedicated clients of Aaron, were now gone. With the absence of loyal customers and an increase in the crime in the New Orleans area, Aaron and his family decided to move once again, but this time, they went west to Austin, Texas. Aaron re-launched his catering business in late 2011 and is now opening a sit down restaurant. The New Orleans Cajun Pie Man will serve flaky crawfish etouffee, jambalaya, New Orleans pasta, and a variety of lemon, pecan, apple, cherry and peach pies. To take his catering business to the next level and open his restaurant, Aaron needed additional capital. A friend informed him about Accion Texas Inc. and what the nonprofit microlender could do for him. Aaron applied and was approved. With the Accion loan, Aaron was able to purchase additional equipment for his kitchen in the new restaurant, lease a new property, and sustained three jobs. Aaron plans to hire additional help in the near future to continue business expansion. But for now, Aaron says, “The Accion loan will help me open my restaurant with the proper tools, and relieve some stress.”