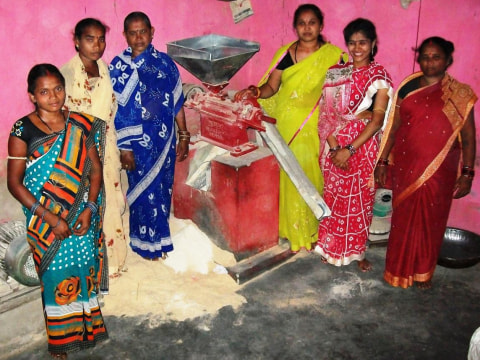 Basudev Group's loan finished fundraising, but these other borrowers need your support

A loan helped To purchase machinery for flattened rice and wheat flour milling.

Dakuluguda is a remote tribal village of Rayagada district in Odisha, India. Most of the inhabitants of this village are tribal. In the year 2010, six active women entrepreneurs in this village formed a group named Basudev to access a loan from Mahashakti Foundation to expand their existing businesses. Mamata is one of them. The lady standing third from right, touching the flour-milling machine, is Mamata. She is an energetic lady of 30 years who lives with her husband, one son who is nine years old and one daughter who is 13 years old. Both her children are continuing their primary education in the village school. Mamata has been running a wheat flour milling business in her village with a single machine for the last five years. Her husband is helping her in this business. She earns a daily net income of 400 INR from the existing businesses. Out of this income, she has been able to manage her household expenses in a decent manner. So Mamata is planning to increase her income by expanding the business. Looking into the demand of the locality, with the present loan, Mamata wants to put another two units of machine in her center. One is for processing flattened rice and another is for wheat flour. She is convinced that this will generate a handsome income for her. Mamata hopes to save enough money to provide a better education for her children and construct another hall for the new machines. The other five members of the group are Sabutri and Sushila who have a general store business, Laxmi who has a Tiffin center with a fast food center, Gayatree who has a tailoring center and Pausa who has a barber shop businesses, respectively.