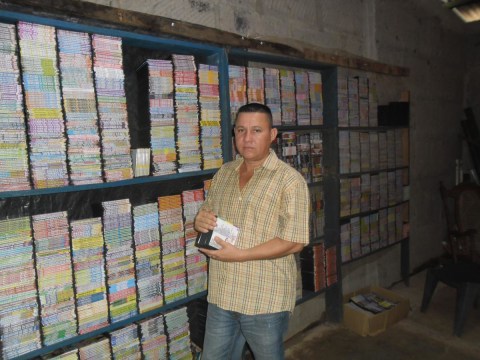 David Antonio's loan finished fundraising, but these other borrowers need your support

A loan helped to buy CDs and DVDs.

David lives in the Las Canoas district in the outskirts of Boaco. He’s a merchant by profession, married and father of three children aged 17, 13 and 10; only two of them are still in school. He sells CDs and his oldest son works with him selling. He started the business ten years ago when cassettes were still used; he’d sell them from place to place going house to house. He participated in street markets and events in town always looking for ways to sell his merchandise. However, he used his savings and a loan to get his own locale and his hope is to increase his inventory a bit which is why he needs financing to buy CDs and movie DVDs because he always needs to offer variety to meet his customers’ various tastes. He says that music, especially rancheras and corridos, are what he sells the most. His goal is that his children have a better future than he; he’s trying to insure their schooling because that’s the only inheritance he can leave them and to keep his business stable and prosperous because it’s the activity his family survives with.