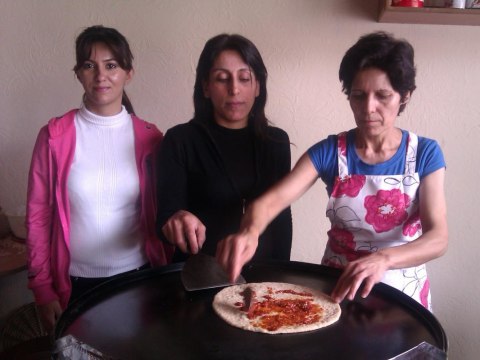 Saj Group's loan finished fundraising, but these other borrowers need your support

A loan helped to purchase ingredients and machines to facilitate the baking process.

Saj is a group composed of three Lebanese women living in a village in Mount Lebanon. They live close to each other and have strong friendship bonds. Their difficult living conditions made them join hands and form the group in order to acquire a group loan from Al Majmoua. Maha is the leader and featured member of this group. She is a 40-year-old married mother of two children, standing in the center of the picture. Her husband owns a small business where he makes and sells pastry, and she works there in order to help him with the baking and to maximize the profit. However, because they live in a small village, their revenue is limited to the number of customers. They earn barely enough to provide for their children, especially since they are both enrolled in private schools, which means that the schooling fees are somewhat of a burden. She decided to acquire a loan in order to purchase ingredients and machines that would facilitate the baking process. Ines is a 30-year-old married mother of two children, standing on the left in the picture. She owns a hairdressing salon in the village. Her husband owns a pick-up and earns his living my fulfilling requests. Both her children are enrolled in a private school, which means that she has to settle the schooling tuition on top of all her other expenses, while the family's total revenue is relatively low. She decided to acquire a loan because she needs to purchase a hair kit for her salon. Nahida is a 55-year-old married mother of one child. Her husband owns a bakery, and she is employed there. She decided to join the group and acquire a loan in order to enhance the bakery and expand it.