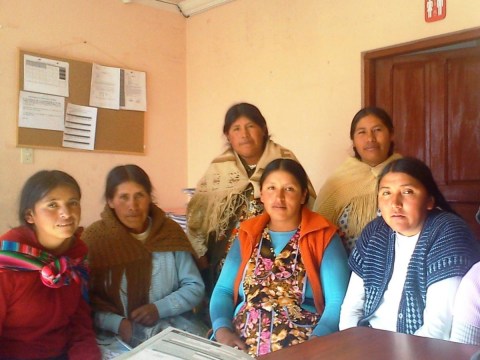 Bolivar Group's loan finished fundraising, but these other borrowers need your support

A loan helped to buy footwear.

The "Bolivar" communal bank will begin its fourth loan cycle with Pro Mujer through the Los Andes regional office. The group is made up of six members and is run by a board of director with Clotilde as the president. The members have different kinds of businesses, including: selling footwear, selling clothing, selling socks, selling tracksuits and selling potatoes. This loan will benefit the microenterprises in the group presided over by Clotilde. Clotilde tells us that she joined Pro Mujer eight years ago following an invitation from a friend who was already a member. Following advice from her mother-in-law, Clotilde started a business selling footwear and she continues with this same business now. Clotilde will use this loan to increase her capital, by buying footwear from the big markets in the city of La Paz. Later she will sell on the footwear. This type of work helps Clotilde to earn a living to maintain her household. She has a partner and two children. When asked what she likes about Pro Mujer, Clotilde responds, saying that she likes the health advice that is provided.