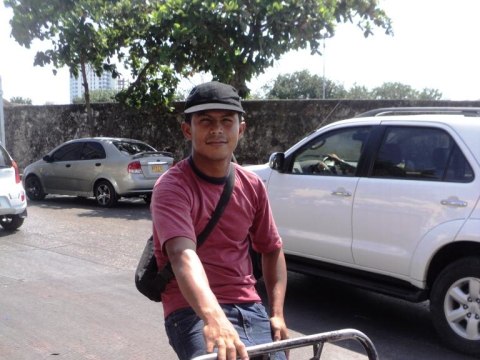 A loan helped to buy a new tricycle, as well as raw materials and supplies to make fried food.

Olman is a 30 year old man. He is married and lives in the city of Cartagena, one of Colombia’s nicest cities. He works there also, selling fried snacks and soft drinks, such as natural fruit juices made from seasonal tropical fruit. His drinks provide welcome refreshment to his customers soaking up the Columbian sun. Olman learned to make fried food 3 years ago, as his mother worked in this area also. In order to generate higher sales, he got the idea that he could sell the products his mother was making. He decided to sell these products from a mobile unit. From there he set up his own business, which soon started to grow. Olman invested in the business little by little, buying a tricycle and customizing it as a point of sale, and over time people have gotten to know his business. His sales are done on a cash basis, from Monday to Saturday from 6:30 in the morning until 11 at night. His main group of customers are the people who frequent the city centre. He locates his tricycle in a business area, which increases his sales capacity. The number of customers and the number of orders are constantly increasing. For this reason he has approached Kiva for a loan. This is his first time requesting finance. His request is through Fundación Mario Santo Domingo. He will use the money to buy a new tricycle, as well as raw materials and supplies for use in preparing the fried food. In this way he will be able to increase production and increase his market. His goal for the future is to operate in more than one area and to have a distribution infrastructure all over Cartagena, in particular close to its lovely beaches, which he himself goes regularly.