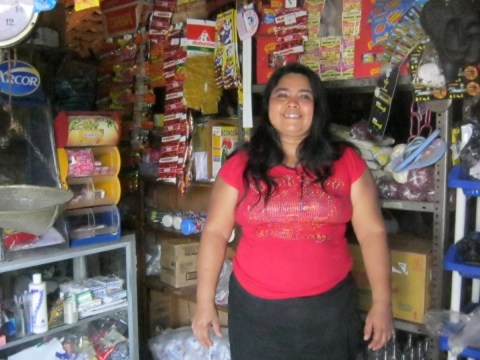 Gladis is 47 years old, is in a relationship, and has four children, ages 30, 25, 21, and 20. She lives with three of her daughters, her father, and three grandchildren. She is an enterprising woman who has had to struggle for her family, given that she has separated from the father of her children more than 15 years ago, and she faced a situation where she has had to support her daughters. It's been a year since she rebuilt her life and started a relationship. During 15 years of work at a restaurant in the nation's capital, and selling clothing in different neighborhoods in the capital, she saved up little by little to build a humble home. Later she returned to the community and with great effort opened a store to sell basic products such as rice, cooking oil, beans, sugar, vegetables, and other things. The store is open to the public everyday from early morning to 8:00 pm. She buys her merchandise every week and some of it every three weeks. She has to board a bus for a 20 minute ride to the city to buy her merchandise, and she goes with her daughters. She will use the money from this loan, through Fundación Campo, to buy sand, cement, iron bars, stone and to pay for labor to build a retaining wall in her home and also a kitchen. Her house only has two bedrooms and a living room. This loan will be very helpful since her house is small and the smoke from the wood fire causes harm to her family. The wall will prevent her house from flooding, now that the rainy season is beginning. This way her family will be more comfortable and not have any respiratory ailments.