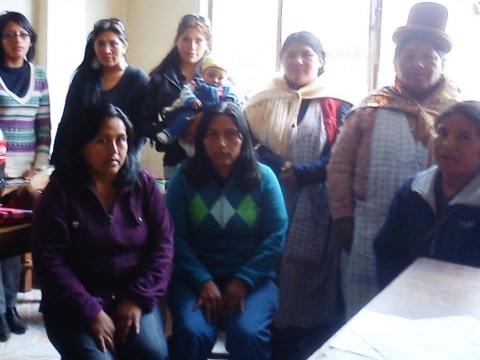 Bella Flor Group's loan finished fundraising, but these other borrowers need your support

A loan helped to buy "añelina” (a coloring agent used for dyeing).

The Communal Bank “Bella Flor” (Beautiful Flower) is starting its fifth loan cycle with Pro Mujer as part of the Villa Adela Community Center. This group consists of eight members and is led by a Board of Directors headed by Sra. Modesta as its president. The members of the Communal Bank engage in various businesses such as selling aprons, selling coloring agents, making handicrafts, selling party supplies, making and selling clothes, and selling food.

This loan will benefit small businesswomen such as Sra. Modesta. She says that she joined Pro Mujer a year ago after receiving an invitation from a neighbor who is also part of the organization. Modesta currently has a business of selling “añelina” (a coloring agent used for dyeing). She learned this trade twenty years ago from her mother.

The loan she is receiving now will be used to increase her capital for buying “añelina”, which she acquires in bulk from distributors. She later sells the product from her retail space. Working in this manner enables her to generate income to maintain her household. Modesta is married and has four children.

When asked what she likes about Pro Mujer, Modesta said that she enjoys the health services that are offered.