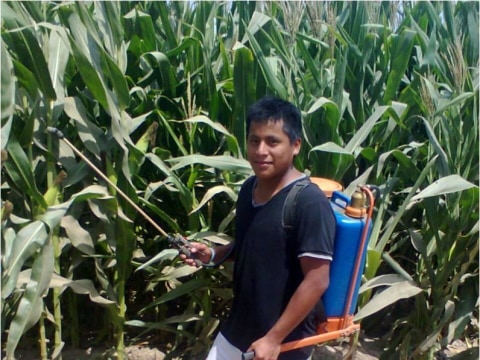 A loan helped to expand his pen for raising pigs.

Jorge, a 20-year-old young man who has a very contagious charisma and a lot of desire to move ahead, lives in the city of Imperial, which is characterized by its varied agriculture and its tourist attractions such as beautiful beaches and archeological ruins. Jorge lives with his parents, whom he supports with the fruit of his labor, and for whom he strives in order to be able to have a better quality of life. Jorge was only able to study through secondary school, but he would have liked to go to college. Jorge works every day as an agricultural laborer. He works about 9 hours a day. He also has his small business selling pigs, which gives him some extra money. He believes that he is moving ahead because he is very hard-working and, above all, responsible. Jorge is very grateful to the Kiva lenders. Thanks to the support they have given him he will be able to expand the pen where he raises the pigs, since currently some piglets have been born and the space is very small to be able to raise them. This way, he will be able to better raise his pigs, since they will be able to feed better and the piglets will not be injured. He will thus be able to continue working very hard in order to make his biggest dream a reality: to go to college and support his parents.