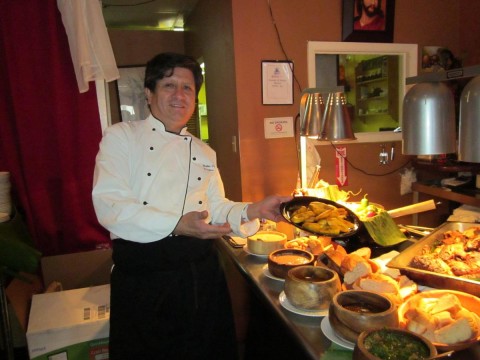 A loan helped to build credit, which is critical when purchasing shelter or transportation.

Chef Waldo had a dream and $146. His dream was to feed people – many people. "First comes the dream, then the idea," he says. "Then the dream can come true." Waldo opened two businesses: Divine Taste Catering, and restaurant, El Ceviche De Waldito. He says cooking is his calling and he uses his mind, heart and talents to satisfy customers with his authentic Peruvian and Caribbean dishes. Born in Peru, Waldo attended a culinary arts school before moving to Miami, where he studied business hospitality before moving to San Antonio. Following his dream, 50-year-old Waldo did everything he could to make the most of his funds. He says when a person has less than $200, "This is the time you use your brain; this is the time you use your heart and say, 'Yes I can.'" With no vehicle, he and his wife walked to H-E-B, a Texas grocer, for food. They searched trashcans for valuables like chairs and tables they later cleaned and tightened for use in the restaurant. After learning about Accion Texas Inc. at a function for small businesses, Waldo applied and was approved for a loan he's using to build his credit. Excellent credit history and scores are judgments of a person's future ability to make large purchases, such as when purchasing any type of vehicle or home. If a person has great credit, they seem more likely to repay on-time, and are more likely eligible for a line of credit to make large purchases. Waldo says, "When you see the opportunity, don't let it go. It's yours, don't let it go." He says, "Accion Texas is like part of the dream come true. I feel covered, I feel like, behind me, there's someone holding my head and my arms named Accion. I don't feel alone." A religious man, Waldo never worried if his business would be successful because he says, "If one is good in life, they'll be rewarded." After two years, he has four employees, four cars and a restaurant where he's served Spanish singer-songwriter Julio Iglesias, President Clinton and Vice President Gore, Mayor Julian, his twin brother, Joaquin, who is a U.S. House Representative, hotel chefs, as well as members of the community. "I'm not small. I'm a big guy. Maybe if you see me, I'm a short guy, but I have a big heart," he says adding, "I say, God, thank you for giving me this experience." When he can, Waldo says he likes to give back to the community, donating his culinary talents to causes. Now that he has a restaurant, he has new dreams to open a community center, start a scholarship fund for parents who think they are too old to return to school, and fundraise with his food to help pay medical bills for families with cancer-stricken children. But, Waldo says he is taking his dream one step at a time.