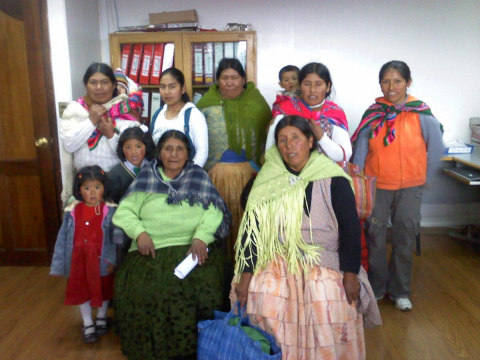 A loan helped to buy potatoes.

The Communal Bank “Grupo 308” is starting its first loan cycle with Pro Mujer as part of the Juan Pablo Community Center. This group consists of seven members and is led a Board of Directors headed by Sra. Silvia as its president. The members of the Communal Bank engage in various businesses such as selling potatoes, weaving blankets, sewing and selling traditional skirts, making braided blankets, and managing a neighborhood store.

This loan will benefit small businesswomen such as Sra. Silvia. She said that she joined Pro Mujer five years ago after receiving an invitation from a friend who is also a member of the organization. Silvia currently manages a business that involves selling potatoes. She started this business several years ago with a small amount of capital. It is improving at the moment.

The loan she is receiving now will be used to increase her capital for buying potatoes. She acquires her inventory at the provincial fairs in the city of La Paz and then sells her products at one of the other fairs in the city of La Paz. Working in this manner enables her to generate income so that she can sustain her household. Silvia is married and has five children.

When asked what she likes about Pro Mujer, Silvia said that she enjoys the loans.