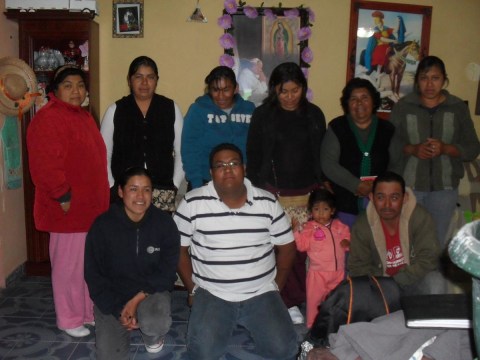 Cabecera Group's loan finished fundraising, but these other borrowers need your support

A loan helped to buy sheep.

The group “Cabecera” consists of seven men and two men. All of them are hardworking and responsible individuals. They live in a small peaceful community.

Doña Angela is a member of this group. She is an elderly woman who is 63 years of age, but this does not keep her from continuing her work of raising sheep. Doña Angela is married to Sr. Gregorio and they have a family that includes seven children, none of whom are dependent on them. She has been raising sheep for 15 years. Doña Angela says, “I started raising sheep because my husband has always earned a meagher salary. There have been many times when we were not able to cover household and educational expenses.” Five years ago, she increased the number of sheep in her herd. Doña Angela bought some lambs to raise and then some time later she sold them to people in her community who prepare barbecue. This time, she is requesting a loan so that she can buy four more lambs.

Doña Angela indicates that she enjoys raising sheep because it is a good way of resolving some of her financial problems. She has never had any difficulties in this line of work since she provides the sheep plenty of care. Doña Angela’s goal is to acquire more sheep to the point that her husband can stop working and live peacefully without any financial worries.

Doña Angela and the rest of her group are very content and appreciative of the loan provided by VisionFund Mexico so that they can invest in their business activities. Elizabeth and Diana will invest in sheep. Arturo will invest in his blacksmith shop. Julia and Guadalupe will invest in bedspreads and bed sheets. Benita sells tortillas. Victoria sells clothing. Ulises sells pastries.