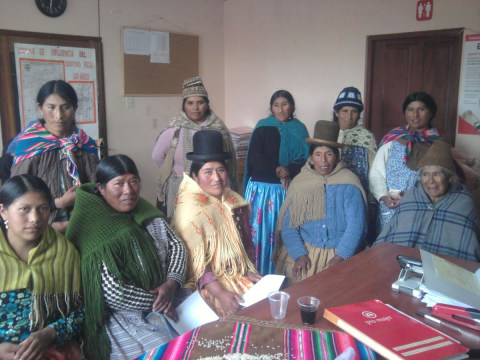 A loan helped to buy fruit.

Señor de la Cruz Communal Bank will start its first loan cycle with Pro Mujer as part of the Los Andes regional office. It's made up of 10 members and governed by a board of directors of which Adela is the president. The various businesses of the communal bank members include carpentry, food sales, wool rug production, neighborhood store, and vegetable sales. The loan they're getting will benefit small business entrepreneurs such as Adela. She says it's the first time she has belonged to Pro Mujer, having joined on the invitation of a loan officer from the institution who visited her at home. Currently she has a business selling fruit. She says it's a family business that she has worked in for years and in which she has a small amount of capital invested. This loan is to increase her capital by buying fruit, which she'll get from wholesale vendors and then sell in her stand. This type of work allows her to generate resources to support her household as much as possible, because she lives in a common-law marriage and has a child. When asked what she likes about Pro Mujer, she says the health area and the loan training.