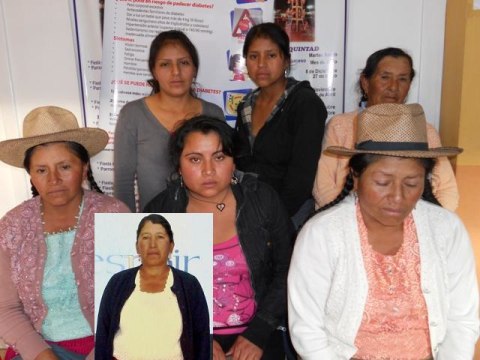 A loan helped to buy chickens and animal feed.

The Communal Bank “Señoras de Taguan” (Ladies of Taguan) consists of eight women who engage in farm work, such as raising animals and growing crops. The youngest members work in the city, but their common goal is to help their families move forward and improve their economic stability. These members have also maintained the culture and traditions of their people. The women live in the canton of Sigsig, a place that is surrounded by lush vegetation. Despite the rugged terrain, the beautiful scenery makes it a pleasure to travel through this place.

One of the members of this group is Sra. Elvia. This is the first time she is participating in a loan alongside her friends and fellow group members of the “Señoras de Taguan” Communal Bank. She lives in the neighborhood of San Bartolo, which is in the canton of Sigsig.

Doña Elvia is 41 years old, married, and has five children (ages 21, 19, 15, 13, and 11). Her oldest daughter is married and lives independently. The second child, a son, helps out financially. The next two children are in high school and the youngest attends an elementary school in town. Her husband works every day as a farm laborer. They own the house in which they live.

Sra. Elvia stays at home and takes care of the household chores, but she also has a space set aside for raising chickens, guinea pigs, pigs, and cattle. She also has tracts of land for farming, so whatever she produces is set aside for household consumption. If there is a surplus, then she sells anything that is left over. In the evenings and in her spare time, Elvia makes woven straw hats. Her loan will be invested in the purchase of chickens and feed for her animals. Her goal is to have a larger chicken coop so that she can raise more animals.

The smaller photo is that of a member who was not present at the time the group photo was taken.