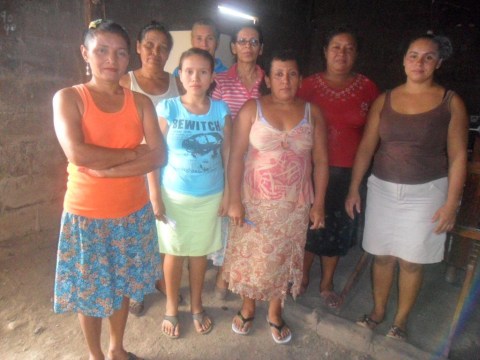 A loan helped to invest in working capital and buy raw materials for making and selling cuajada such as milk, rennet and plastic bags.

The 'Luz Divina' (Divine Light) community bank has 8 members who are all single mothers and, between them, have 20 children in their care. They are from El Sauce, in the western part of the country, an area which is known for its production of milk, cuajada, cheese and cream. These women are noted for being hard-working and responsible, and having a desire to improve themselves. Unfortunately, none of them was able to attend school. However, they work hard every day so that their children can enjoy a better future and become good, upstanding citizens. The coordinator of the Luz Divina community bank is Nubia, whose business is making and selling cuajada (a type of cheese). She makes her sales from home and also as an itinerant street vendor. Nubia works for 8 hours a day, selling her products which she carries in a 15kg (33lb) basket on her head. She is requesting this loan to invest in working capital and buy raw materials for making and selling cuajada such as milk, rennet and plastic bags so that, in the not-so-distant future, she can make better income. The 'Luz Divina' community bank is grateful for the help that Kiva lenders provide to people with limited resources in poor countries such as Nicaragua so that they can earn a decent living.