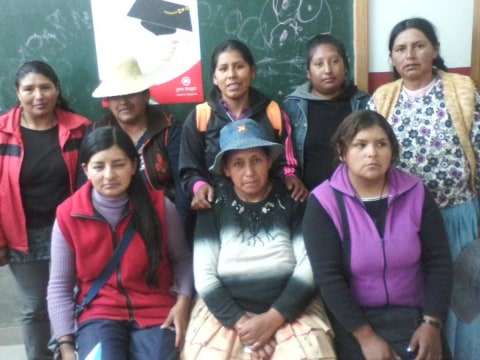 Luz Andina Group's loan finished fundraising, but these other borrowers need your support

A loan helped to purchase clothing.

The communal group Luz Andina is starting its fourth cycle with Pro Mujer, which belongs to the regional office of Senkata. It comprises eight members and is governed by a board of directors, Elsa being their President. The members of this communal bank run a variety of businesses, such as: making party favors, selling snow cones, selling food, selling soft drinks, working construction, selling cakes, and running a neighborhood store. The loan they are taking out will benefit Elia's group of small businesswomen. She says she has belonged to Pro Mujer for two cycles, and became a member through a friend who is also a member and invited her. She currently has a business that sells clothing. She says she started her business through a friend's initiative and advice. Since she had some small savings, she started her business. She will use the loan she is now taking out to increase capital (purchase clothing). She will buy it from the wholesale sellers in the city of La Paz, and later sell it from her stand. This type of work allows her to generate income so that she can support her household as much as possible, because she is married and has three children. When asked what she likes about Pro Mujer, she says she enjoys the trainings on health and lending.