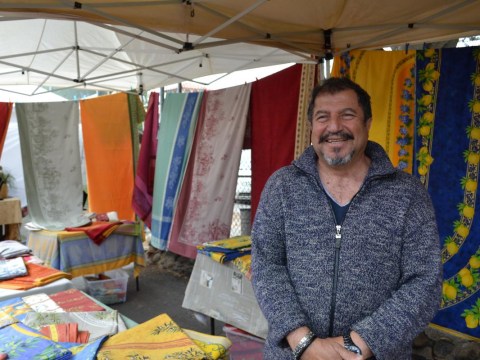 Khosrow's loan finished fundraising, but these other borrowers need your support

A loan helped to buy more inventory and open a second booth at the farmer's market.

As a young professional soccer player in Italy, Khosrow never dreamed he would one day be a business owner in the US. After living in Italy and France for 35 years, Khosrow wanted to provide a better life with more opportunity for his daughter and moved his family to the US in 2002. It was not an easy move, but the struggle to start a life in a new country empowered Khosrow to start his own business. Having lived in the south of France for many years, Khosrow had a deep appreciation for the specialty tablecloths and napkins from the Provence region. His enthusiasm sparked a business idea—to provide quality tablecloths and impeccable service to Americans. Khosrow’s idea quickly flourished into a successful local shop, Desire. The recent recession pushed Khosrow to move his business to farmers’ markets and close his shop in 2007. Although a major decision, Khosrow found that he still retained much of the business he had established and enjoyed the personal interaction with customers at the markets. His daily motto is, “If you are good and honest, people come back to you.” However, in 2008, more disaster struck. A break-in occurred at Khosrow’s warehouse and over $97,000 in inventory was stolen. Devastated, Khosrow picked up what was left of his business and started over using all that he had left. His loyal clientele stood behind him and bit-by-bit Khosrow was able to regain some of his losses. Since then, Khosrow has continued to work almost every day selling his specialty tablecloths, napkins and other Jacquard fabrics from Provence. With this Kiva loan, Khosrow will be able to purchase more inventory to be able to open another booth at a secondary market every day, reaching more customers. Khosrow’s goal is to hire an employee and teach them his daily motto and the benefits of being a smart business owner.