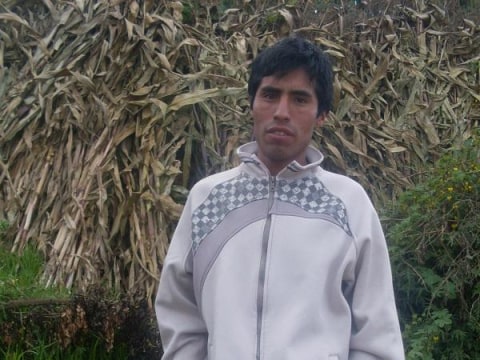 Nehemías, 23, is a single young man who lives with his parents and younger siblings. He lives in his own house, built of rustic materials and located in a rural annex. As a child he helped his parents weed and harvest their crops. His parents saw how effectively he worked, so they decided to give him his own plot of land. This is how he began to grow peas, beans, potatoes, and vegetables. "It's a profitable business, but you have to invest a lot in seed, fertilizer, and labor," he says. Nehemías already has known customers, buyers from a hamlet about 40 minutes from his area. He was investing his profits in his studies of machine maintenance. Now that he finished studying, he continues making a living in agriculture and driving heavy vehicles to the central jungle area. Nehemías is a young man with clear plans. In the future he hopes to buy more plots of farmland to plant larger quantities with the help of his family, who always support him. This is his fourth loan with Kiva. He says he's grateful for the help he receives from the organization, so he promises to make his payments punctually. Currently he'll request 2000 soles [PEN] to buy organic fertilizer to be able to start his own planting.