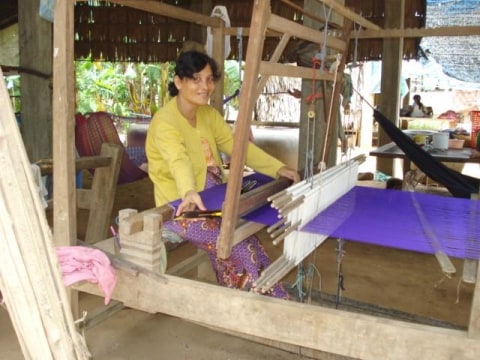 A loan helped To purchase silk for weaving.

Mrs. Phal K., 53, and her husband, Mr. At Vorng, 49, who live on an Island of Mekong River about fifteen kilometers from Phnom Penh were married in 1979 and have seven children, one son and six daughters. Two of their children are married and live outside the family home. Four of her children are in local school and one weaves silk at home. Mrs. Phal has been a silk weaver for twenty five years, a skill she learned from her sister. She sells her finished products to the middle man in the village, who then takes it to sell in Phnom Penh. Her husband has been a farmer since 1979. Phal has three looms in the family so she is requesting a loan of US$600 to purchase silk so that she can continue her weaving business.