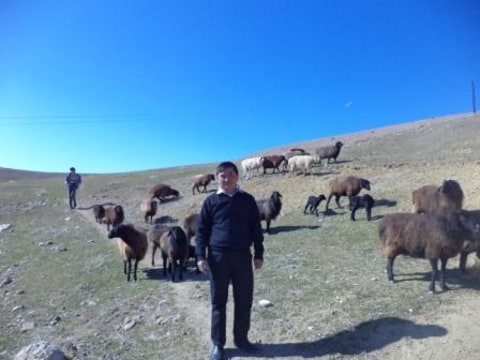 A loan helped to purchase livestock and livestock feed.

Habibulo is a young, active, and experienced shepherd. Despite his age, he has already managed to create his own small farm. He has about 25 sheep and seven cows. He has 17 years of experience in animal husbandry. He is married and has five children. Animal husbandry is his main source of income. His cows and sheep provide his family not only with milk, but also with their "daily bread". Habibulo takes his profession very seriously. He spends a large portion of his time in the pasture where he takes his sheep to graze. He has big plans for the future. He wants to build a home and send his son to the city to study. However, his financial circumstances don't allow him to bring his dreams and plans to fruition. Additionally, last year an unfortunate event occurred - some of his sheep died due to flooding and disease. Habibulo pulled himself together and continued on with his work. His wife helped him a lot. She milked the cow, sold the milk, and did the shopping with the income they earned. Now Habibulo is saving and being economical. As the father of five children, he tries to ensure that his family does not go hungry. Upon finding out about loans, Habibulo turned to MDO "Advand". He would like a loan to purchase livestock and livestock feed at the right moment. He hopes that Arvand will support and help him to recover from his loss. Habibulo, his children, and his wife thank you in advance for your help and understanding.