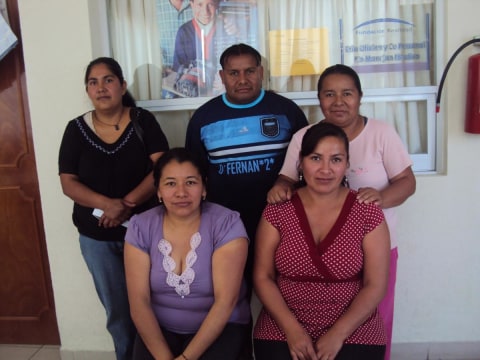 A loan helped to buy secondhand clothing and shoes to sell.

Leopoldo is a hardworking man. He is responsible with his payments. He says that he previously was in a group but unfortunately one of the members died and the group broke up. He decided to join his neighbor’s group as he knew her as a hardworking and reliable woman. He states that he works selling secondhand clothing and shoes. He says that it all began because when he was working in the United States he sent clothing to his wife for her to sell and as he saw it was a very good business he decided to return to be at his family’s side and they could make the business more productive together. Leopoldo says, “while my wife positions herself at the front door of the house I go to sell in the street markets in the area. Sometimes I take the car to sell at the farmhouses and if sales go very well it is because I bring quality clothing at a low price.” He gets his clothing in a village called Hidalgo, Michoacán, where they sale bales (wholesale) of clothing of different sizes, colors, and for every taste. He says that he is asking for a loan because he wants to replenish his merchandise because now another season is coming and he wants to have warm weather clothing. His goal is to buy a stand at a marketplace so he doesn’t have to walk from one side to the other, being established. The other members of the group are called Minerva, Rosalba, Rosario and Norma. they will invest their loans in a grocery store and in the purchase of supplies to make Mexican treats.