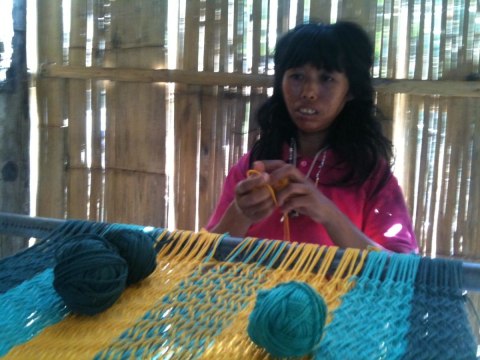 A loan helped to pay for yarn and ensure a steady flow of income throughout the year.

Mrs. Sukanya never expected an easy life. After all, she was a Mlabri woman, and life was never easy for any Mlabri woman. Ever. Born in 1967, Sukanya has lived through heartbreak that most people would find hard to overcome. She was a child during the Mlabri’s painful struggle to adapt from peaceful hunting & gathering to the modern world. Her youth was a time when many of the tribe died of malnourishment and malaria, while the rest were forced into indentured servitude in toxic slash and burn agriculture. Sukanya had six children of her own who lived, as well as three who died in infancy. Her husband left her for another woman and she has faced with courage and resolve the task of raising her children as a single mother. Hammock weaving made it possible for Sukanya to provide for her family. Weaving hammocks is her primary source of income and the only available work that makes it possible for her children to grow up healthy and educated. Sukanya grew up with no schooling; numbers and letters are still strangers to her, though necessity has taught her basic math. She manages to budget her money to keep her family fed and clothed and is intensely interested in her children's education. Through her Kiva loan, Sukanya will be able to plan a stable annual budget for her family for the first time, ensuring that her children are provided for and that her schedule will allow her to dedicate her energy to work, schooling and family.