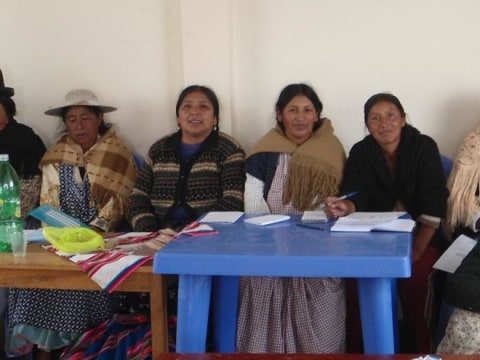 Cristiano Group's loan finished fundraising, but these other borrowers need your support

The communal association "Cristiano" will begin its second loan cycle with Pro Mujer as part of the Copacabana regional center. It consists of nine members and is governed by a board of directors, of which Señora Edith is the president. The businesses of the members of the communal association are varied. Among them are agriculture, fishing, raising cattle, and selling fish. The loan that they will take out will benefit thse little micro-entrepreneurs who work in different areas, including Señora Edith. She indicates that she joined Pro Mujer six months ago, joining at the invitation of a loan officer from the institution who came to visit her. Now she has a business of selling cheese, milk, and jerky (dried meat). She comments that her father-in-law counseled her to sell these products because he generated income from raising a cow. The loan that she will take out now is to increase her capital by buying cattle that she will acquire from the nearby communities, and after raising them she will sell them in her sales space. This form of work allows her to generate resources to support her household as much as possible, since she is in a common-law marriage and has two children. When she is asked what she likes about Pro Mujer, she answers that she likes being in a group of friends.