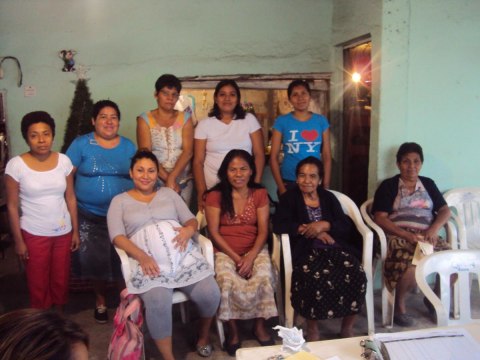 One of the group members is Fredy, 26 years old. He is single and lives with his parents. He wants to help his parents with their household expenses, so two years ago he asked his mom to teach him to embroider. Now he has his own customers. His most popular products are napkins, tablecloths and pillowcases. "This is a good business, I support my parents and can by things for myself. For example, I just bought a motorcycle with the profits from my business." He also makes bolones [fried plantain balls] in the afternoons and goes out on his motorcycle to sell them in the streets. He says they sell very well. Fredy is asking for a loan to buy things in bulk so that he can get a better price and have greater profits. He will buy thread, needles, pillowcases, tablecloths and embroidery hoops, as well as flour, ham, sausages, pineapple, ketchup, hot sauce, etc. Fredy's wish is to be able to have a store with display cases to show his embroidery work, as well as to sell other miscellaneous goods. The other members of the group are: Sirina, who sells snacks; Juana, who sells clothing; Avelina, who sells snacks; Maria, who sells mole; Rosalba, who sells clothing; Lorena, who sells shoes; Irma, who sells tacos; Minerva, who sells snacks; Ariana, who sells clothing; and Veronica, who sells silver accessories.