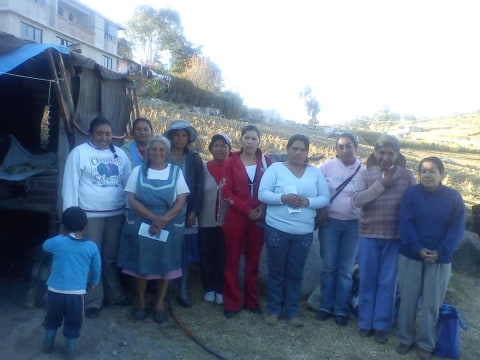 The group "El Calvario" (The Calvary) consists of 10 members, all of them women, very hard-working people. The group meets on a hill where the best thing to appreciate is the afternoon sun. The members chose the name of the group, and they chose it because in the area where they live there is a chapel which is also called The Calvary, and it is where they observe the crucifixion of Jesus during Holy Week. Doña Elena, who is part of the El Calvario group, relates that she is 33 years old. She has been married to Señor Victor for 9 years. Together they have formed a family with three children, who are in school. Doña Elena's work for eight years has been making popsicles and ice cream. She makes them to sell, and she comments that she began her business because before they were married Don Victor was already selling popsicles and ice cream. The popsicles and ice creams are made two days ahead of time, since the preparation involves a process of grinding the fruit, putting it into molds to then set it to freeze, and finally putting it in bags. When they have the ice creams and popsicles ready, they gather them in their cart and go out to offer them in the market or in the community where they live. Doña Elena comments, "I very much like to go out to sell my ice creams and popsicles and hear the people say that they like my products. It is the greatest satisfaction that I obtain from my customers." Doña Elena is applying to the institution for the loan to buy more materials to make her popsicles and ice creams, such as sticks, coloring, fruit, and milk. The difficulty that Doña Elena faces is in the cold season, because nobody buys her products, since the last things people want to eat are cold things like popsicles and ice cream. However, this does not stop her from having a dream of someday having a bigger freezer. This will help her so that her daughters can some day have a professional career and have a better quality of life. The members of the group are very happy with the credit offered, since they will be able to invest in their businesses, such as Doña Felicitas, Elia, and Enriqueta in a little grocery store; Cristal in construction tools; Petra, Maria Guadalupe, Luisa, and Margarita in sheep; and Doña Alberta in clothes.