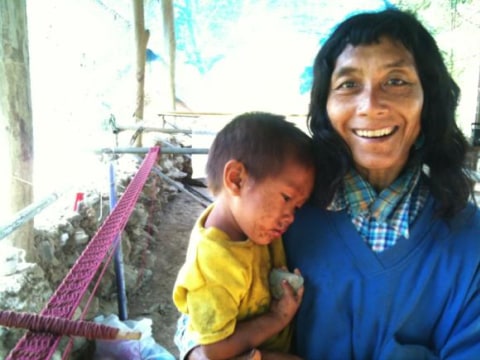 "yalana" Duangpon's loan finished fundraising, but these other borrowers need your support

A loan helped to pay for yarn and ensure a steady flow of income throughout the year.

Meet Yalana (pronounced Yuh-luh-NA) Yalana is an artisan hammock weaver and the mother of 3 children. She was one of the first Yellow Leaf weavers and will be a member of our inaugural Kiva microloan class. Through a zero-interest Kiva loan and the Yellow Leaf distribution network, her family will have guaranteed weaving income and financial stability for the first time in 2013. This is a tremendous step for a woman born in Yalana’s circumstances. Yalana was born in the jungles of rural northern Thailand at the end of an era for her tribe, the Mlabri. When she was a young lady life rapidly changed as deforestation destroyed much of the jungles in which the Mlabri had lived for generations. Without any land rights or capital to farm, she, along with the rest of the tribe, eventually became indentured servants working in the fields of the more aggressive tribes in the area. Her father was a respected sorcerer and very knowledgeable about traditional Mlabri life. As encroaching logging and agriculture overwhelmed traditional ways of life, she found herself with few alternatives to servitude. Hammock weaving presented an excellent opportunity! Today she lives in the Ban Bunyuen village and helps provide for her family by applying her traditional artisan talents toward weaving hammocks that are sold around the world. She has acquired enough independence to be able to plant rice fields for her family, generally harvesting enough grain to last from one harvest to the next. Hunting and foraging continue to play a role in her family’s daily sustenance, but they are no longer limited to what they can hunt, trap, catch or kill; her income from making hammocks affords them healthcare, education, and food security formerly unavailable to them. With her past way of life no longer viable, she has adjusted to her new situation while maintaining her pride and confidence in being a Mlabri person. With this loan, not only will she will be able to make more money, but she can create a stockpile of hammocks during the off season to ensure a steady flow of income throughout the year.