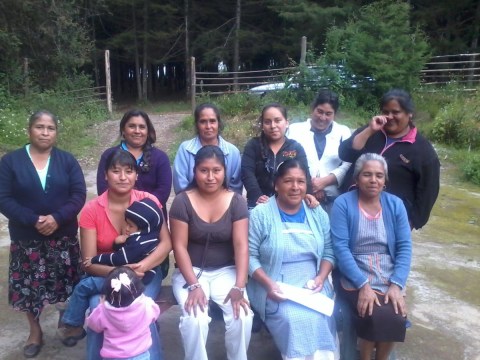 Los Encinos Group's loan finished fundraising, but these other borrowers need your support

Ricarda is a hardworking woman. She’s 44-year-old and a widow. She’s a member of the “Los Encinos Ganadería” group. She says they gave it this name because where they live oak trees are common and the ‘ganadería’ part is because most of the members work raising pigs, cattle and sheep. She says that at her husband’s death, she’s had to take on her children’s care all by herself. Back then, the three of them were students but now two of her daughters work in Mexico City as domestic employees and they help her support her son who is attending high-school with much sacrifice. She’s been growing avocadoes for more than four years. She says: “My husband left me a business that requires much hard work to care for but thanks to it I’m able to move my son, who is studying, forward since I was unable to study due to the lack of resources. I have to devote myself to the land my late husband left me and thanks to the three loans I’ve gotten I’ve been able to move it forward even though I did neglect it somewhat when my husband died but now it’s in good condition.” She says she’s asking for this loan to buy organic manure, fertilizer and insecticide to protect against the chilling frosts and hail storms that are common in winter. She says that she now has about 200 trees and hopes to continue planting more since her field is large; it’s almost two hectares and she wants to cover it entirely with this type of fruit. She relates that when it’s harvest time she heads to the wholesale food market to sell them by the kilo since it’s more profitable to sell them that way. She says the last few harvests have been good since her yields were quite large. Her greatest hope is that her youngest son will have a career so he will not have to suffer working in the fields and that her daughters can restart their schooling because she does not like their being so far from her. She also wants to continue to buy avocado plants to continue growing them and leave a good business for her children. The other group members’ names are Eulalia, María del Carmen, María Luisa, María, Alicia, María Angélica, Lorena, Rosario and Sandra and they will use their loans to buy fertilizer, organic manure for avocado farming, will buy feed and vaccines for pigs, fertilizer and manure for tomato crops and will buy merchandise to stock a grocery store.