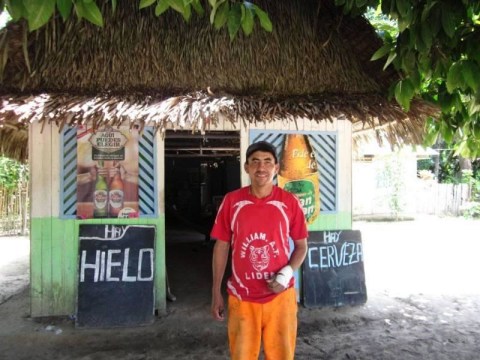 A loan helped to buy a sound system, and tables and chairs to give atmosphere to his business.

Edward, 44 years old, is an entrepreneur and a dreamer. He lives in his own home with his partner María, who helps him in the activity of selling carbonated beverages. They have two children who are studying in school. Edward’s work consists of selling carbonated beverages such as different brands of beer, and soft drinks of various flavors. He has a freezer which permits him to have iced cold drinks to please his customers. This work is done in a facility that is at his own house. He has been in this business for six years and it’s going well. He says that he began this business because the place where he lives did not have a store where you could buy these drinks. He considers it a profitable business because of the intense heat of the city, causing people to drink more beverages, then his sales increase and he gets better profits. He says that the problems that he had at first were because he could not buy the drinks his customers wanted due to the lack of capital backing. He is waiting to raise capital in order to rebuild his facility to give better service to the people that come to his business. So this will be his fourth loan through the institution MFP. He is happy being a member of the group of which he is a part, because the other members are punctual and responsible. He is grateful to the institution because it offers the opportunity of having capital backing. With the requested amount of 2000 soles he will buy a sound system, tables and chairs, etc., in order to improve the service and increase his customer base. Then his earnings will increase and he will make his payments on time.