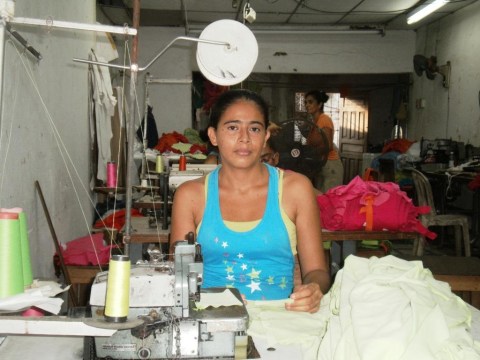 A loan helped to buy fabrics, thread, fasteners, and clasps in large volume.

Marcela, who is 28, makes clothing in a little workshop in her home, where she lives with her husband and their two children, ages 2 and 5, the driving force for her life and that of her husband. Her experience dates from 10 years ago, because her mother had such a workshop for 18 years, and so she and her sisters lived among fabric and sewing machines and became involved in this art since their childhood. To this day, Marcela is the one who became most interested in converting her productive training in her mother's workshop into a generator of income, to create well-being in her household. She provides a service of making clothing for women and men for a customer base she has built little by little among neighbors, business employees, relatives, people referred to her, and assembly work for important businesses, which adds another source of income, as well as work she does with her mother, who still advises her and her husband so that the common work will be more effective. She makes her sales on credit with weekly payments and works in her workshop from 8 in the morning until 6 in the afternoon. Her goal is to expand her market, increasing the production, especially at the end of the year, when there is a lot of turnover of money and orders compared to what she usually has in other times of the year. This is why she is turning to a Kiva loan, with which she will buy fabrics, threads, fasteners, and clasps in larger volumes, and with these she will get many discounts, since the suppliers are also making their best offers during this time, which will benefit the potential for the success of her Kiva loan.