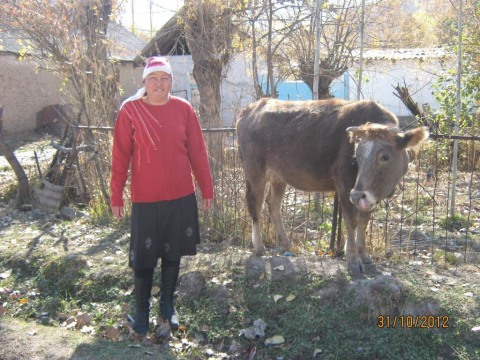 A loan helped to purchase a cow and sheep.

Fatima is a 37-year-old widow, raising three children, two girls and a son. Fatima's husband died suddenly. They started their own business together, but after his death she was left alone with the children with all of life's problems. The local administration paid benefits for a single mother of 3,500 KGS. Despite all the problems, she remains cheerful and upbeat. She firmly believes in the bright future of her family. As the main source of the family's income, Fatima engages in raising livestock. Begun ten years ago, she and her husband bought a cow for 8,000 som (KGS) and today on her homestead she has two dairy cows and a horse. Her monthly income from the homestead is about 6,000 som (KGS). With the goal of developing her business, Fatima appealed to Bai-Tushum and Partners for a loan of 50,000 som (KGS) to buy one cow and five sheep. Fatima plans to use the income to further expand her homestead and would like to buy furniture for the home.