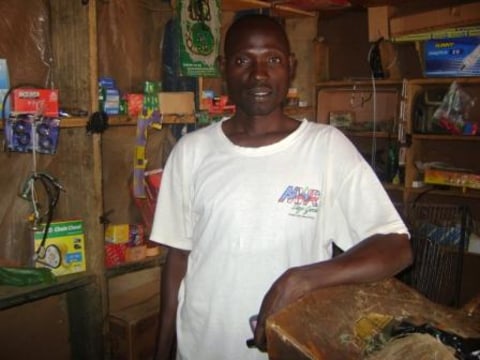 Soumaïla is 36 years of age, married, and a father to four children. He lives with his family in Sanoubougou, an extension to one of the popular neighborhoods of the village of Sikasso (the third-largest administrative region in the Republic of Mali). After many unsuccessful businesses, 12 years ago Soumaïla started working selling miscellaneous articles, and has a store in front of his family home where he sells his items: cigarettes, candies, matches, chewing gum, powdered milk, tea, sugar, soap, and so on. He is much sought-after by his customers, due to the quality of the products he sells. To satisfy his ever-growing customer base, Soumaïla decided to join the Soro Yiriwaso microfinance institution about a year ago. After successfully repaying his two earlier loans, he is now on his third. This loan will allow him to buy 15 packs of varied cigarettes, five bags of sugar, 12 boxes of tea, 10 packs of candies, 10 packs of chewing gum, 12 packets of matches and eight boxes of soap. He buys his merchandise from wholesale traders in the city, before reselling them in his store. With this loan he plans to make a monthly profit of 175,000 francs CFA, which will mainly be used to increase his working capital, contribute to covering the household expenses, and pay the interest on his loan.