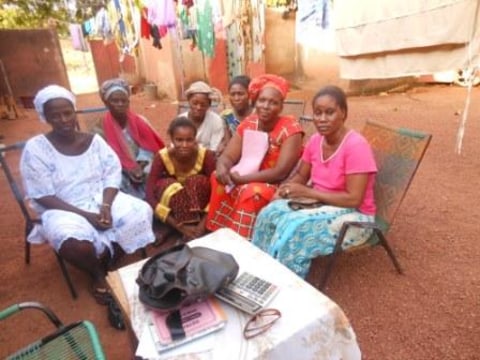 TIESSIRI is a group which consists of five married women, one widow, and one unmarried woman. On average, these women are 39 years old and have four children each. They live in extended traditional families with their husbands, co-wives, brothers and sons, in the Torakabougou neighborhood of the city of Bougouni. They know one another through ties of community, friendship and commerce. In order to bolster their financial capacity and to do better in business, they have joined the microfinance institution Soro Yiriwaso, and this is their second loan with the institution. Their previous loan was duly repaid. This women's group sells clothing, grains, perfumes, vegetables and many other various goods. Fatoumata, the president of the group, is sitting first from the left in the photo. She buys and sells clothes, and she is planning to use her loan to buy three boxes of used clothing from wholesalers in Bamako. She sells at the market and from home, for cash or on credit, to a retail customer base which mostly consists of women. She is expecting average monthly profits to reach 20,000 CFA francs, which will be invested in her business and also used to repay her loan.