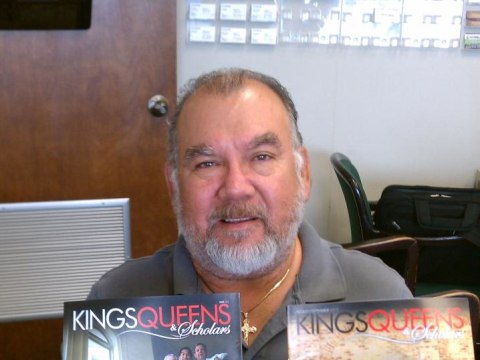 A loan helped To purchase equipment and continue his publishing job.

When Silvestre decided to give back to Harlingen and the surrounding communities, he considered forming a non-profit organization but said there is normally a higher inconsistency rate as there is not enough room to direct, which hinders a successful process. Kings, Queens & Scholars Magazine, which focuses on excellence in education, quickly sold out on its first day of publication in 1994, but its success ended in 1999 when Silvestre was promoted in his career as a Federal officer. “With the constant traveling, I didn't have time to dedicate to my publication,” he says. Silvestre funded the magazine because he saw students and parents needed assistance and guidance during their exiting years of high school. The original format focused on academia instead of sports, but when considering rekindling the magazine, Silvestre decided to include sports and incorporate stories written by educators, attorneys, dentists and other professionals sharing how they continued their education to obtain their jobs. Silvestre says this process helps students by reinforcing the importance of staying in school and continuing after graduation. “We’re valley wide ranging from South Padre Island to Rio Grande City,” he said. Currently, the majority of the magazine’s content derives from journalism students, which gives them an opportunity to publish their work and gives Silvestre the ability to completely cover the valley. Silvestre employs a photographer, who also teaches, a design graduate who works on the design elements and his son as the publisher and computer technician. “We do a lot for the community” he says. “We’re helping and guiding students, teachers, and parents with information about colleges, scholarships and the like,” he says. “It’s to help the community. This is our way of thanking everyone who has helped us, and giving back to the community.” After hearing about Accion Texas Inc. from The Harlingen Economic Development Corporation and the City of Harlingen, Silvestre contacted Accion for a loan. He says the loan will tremendously assist the magazine in a very positive way as he was able to purchase computers, cameras, chargers, batteries and a printer to continue production. The magazine is published bi-monthly. Silvestre expects to keep this pattern until about March 2013, when he feels he will be able to reach his goal of publishing monthly. “We’re currently building our clientele,” he says. Visit Kings Queens & Scholars Magazine’ website for more information at: http://kingsqueensandscholars.com/; or view their Facebook page at: https://www.facebook.com/KingsQueensScholarsMagazine.