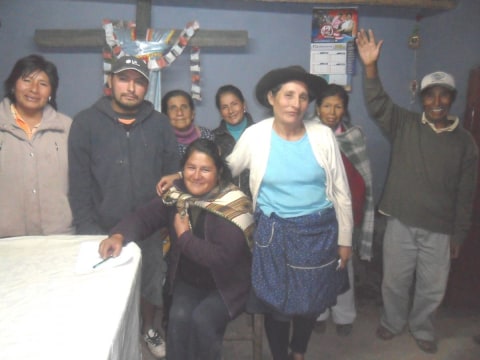 A loan helped To buy fertilizer and seeds.

A group of neighbors and friends formed the "Señor de Ccoyllority de Huayllabamba" communal bank in the city of Huayllabamba in the province of Urubamba, in Cusco department. This communal bank is made up of people who are continually looking for opportunities to succeed, and with their daily effort, to provide a better future for their children. The majority of the members work in agriculture and raise livestock. The borrower, Aquilino, was born in the city of Huayllabamba, and lives in the same city where he was born. He is 66 years old, married, and has eight children. Aquilino's livelihood is farming, and he grows various types of vegetables and tubers. He has been farming for several years now, and it is going extremely well, thanks to the effort he puts into his work. On this occasion, Aquilino wishes to buy fertilizer and seeds. Aquilino is seen in the photo, raising his hand. The members in general are grateful for the opportunity offered, and promise to make their various installment payments on time. Cusco is located in the district and province of Cusco, in Cusco department. It is in the very heart of the ancient city of the Incas, and is known for being a tourist area, for its archaeological sites, for its historical center, for its scenery, for its history, and for being an enchanting city in the southern region of the country. Cusco is known for being a major tourist and commercial area, for its traditional Inti Raymi festival, and because one of the Seven Wonders of the World, Machu Picchu, is located there.