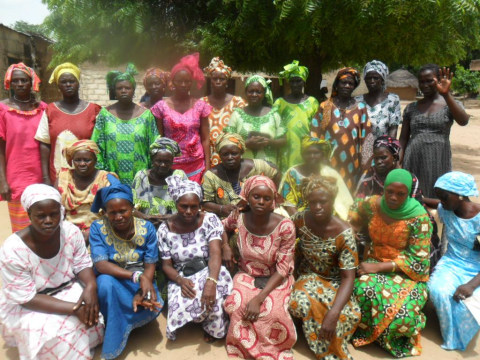 Pc1 Thieo Group's loan finished fundraising, but these other borrowers need your support

This group, which was set up on 27th December 2012, is made up of women from the same village, who are all active traders. They are united by social links and have been part of the same group for a long time. Maria Coumba is a married woman, who is 34 years old and mother to three children: two boys and a girl. She sells curdled milk and breakfasts. She is standing on the far right of the photo, dressed in black and raising her hand. With her new loan of 150,000 francs she is going to get milk from her suppliers, who are shepherds, in her village and resell it on a retail basis in the village, on the highway and in Thiès, to customers who work in organisations. The profits she makes will allow her to pay the interest on her loan and to save money with the Banc Villageois, but also to provide for her children's food, clothing and health.