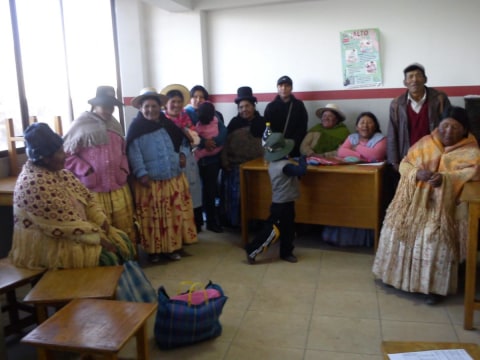 A loan helped to buy meat.

The “FLOR DE HABITAS” communal bank will begin its third cycle in Pro Mujer as part of the Centro Focal de Panamericana. It is made up of ten female members and is directed by a board of directors of which Martha is the President. The businesses run by the members of the communal bank are varied and include: selling fruit, a butchers, producing sweets, sewing centrepieces, selling cheese, selling skirts and dressmaking, a local shop, selling quinoa juice and making macramé blankets. The loan which they will receive will benefit the small businesswomen, including Martha who has been in Pro Mujer for two years. She entered the scheme on invitation by a promoter of the institution who went to visit her in her home. She currently has a butchers shop, and she says that she started up the business years ago, learning the trade from her godmother who had the same business. The loan which she will now receive is to increase her capital (purchase of meat) which she will acquire from a distributor in the city of El Alto and which she will later sell in her shop. This way of working allows her to generate resources with which she can support her family as much as possible. She is married with two children. When asked what she likes about Pro Mujer, she replied that she likes the meetings with her fellow members. In the photograph Mrs Santuza's husband who is wearing a white cap and is currently unemployed accompanies the group.