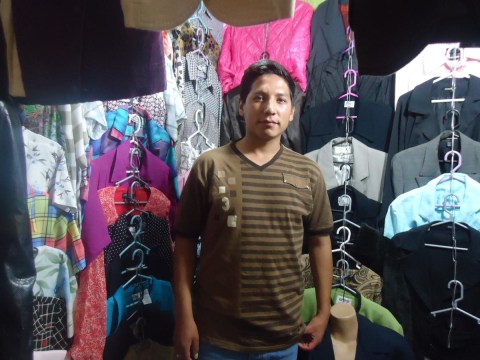 Gustavo is a modest, upstanding young man who greatly desires to help his mother with the household expenses. So he decided to start a business that would generate a good income. Following the advice of his mother's friend and his own inclinations, he began selling women's and men's clothing, and over time and at his customers' request, he began offering a wider range of items. He now sells women's purses and sweaters. At dawn on Thursdays and Sundays, Gustavo heads to the El Alto fair. He wants to be the first customer because the suppliers who offer exclusive merchandise there run out early in the morning. Later he takes the merchandise to his stand, where he attractively displays it, hoping for quick sales. He needs the loan to stock his business, that is, to increase his sales with more operating capital. Gustavo's main goal is to study at the university. His mother's health is poor but improving. She has helped him minimize his expenses by bringing him lunch every day. They would like to live independently at some point; they now live with his grandparents.