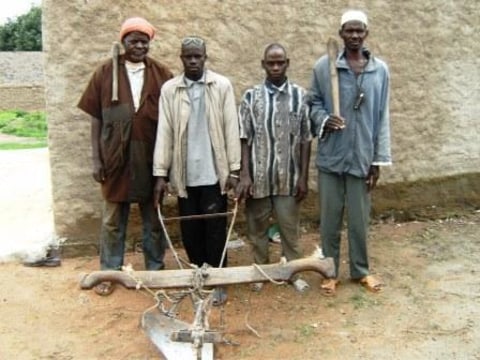 Dounkafa 3 Group's loan finished fundraising, but these other borrowers need your support

A loan helped to purchase farm inputs and seeds and to cover the cost of plowing.

The four members of the group DOUNKAFA 3 are married men averaging 45 years of age and four children each all living in traditional families in DALABALA, a village in SELINGUE (3rd administrative region of the Republic of Mali). The men are collaborating with the microfinance institution Soro Yiriwaso in order to carry out their farm work during the rainy season. They are now on their third loan with the institution. The last two loans were indeed paid back. The crop grown is corn, as is the case with KALILOU, who is found first from the right in the photo. He intends to use his loan to purchase some farm inputs and seeds and to cover the cost of plowing for maintaining 2 hectares. After the harvest, the produce is sold in the village and at the DALABALA market to a customer base composed of men and women. He plans on making an average profit of 300,000 francs CFA per planting. This profit will enable him to repay his loan and also to help his large family to cover day-to-day expenses.