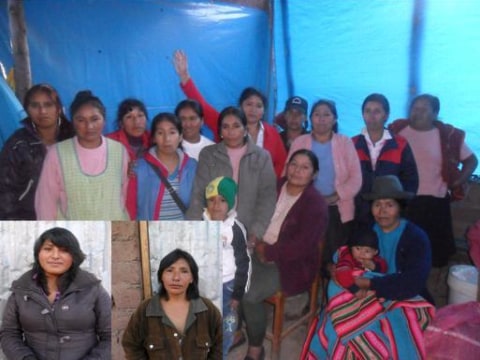 A loan helped to buy sacks of rice and sugar.

The communal bank member Benedicta is 46 years. She lives in a free union relationship, from which she has four children. She now lives in the beautiful province of Calca in the department of Cusco. Her principal business activity is raising hens, chickens, and guinea pigs. She has had this business for a number of years, and it is going very well for her. In addition, Benedicta also sells basic food products such as rice, sugar, milk and other items. She has a little grocery store where she stocks her merchandise. Benedicta now needs the loan to buy sacks of rice and sugar. (Communal bank member Benedicta is raising her hand in the photograph.) This group consists of neighbors and friends who formed the communal bank "Señor de la Vara" in the province of Calca in the department of Cusco. It is made up of people who at every moment seek opportunities to advance and with their daily effort to give a better future to their children. The members' business activities are, for example, selling clothing, raising chickens, selling vegetables, and selling groceries, and others offer services such as transportation and cellular phone calls. The members in general appreciate the opportunity offered them and promise to make their various payments according to the established schedules. (The people who appear in the lower part of the photograph arrived late for the meeting of the communal bank). Cusco is located in the district and province of Cusco in the department of Cusco, in the heart of the old city of the Incas. It is characterized by being a tourist zone because of its archaeological centers, its historic center, its landscapes, and its history, and for being an enchanting city in the southern region of the country. Cusco is also known for its traditional celebration of Inti Raymi and for one of the seven wonders of the world, Machu Picchu.