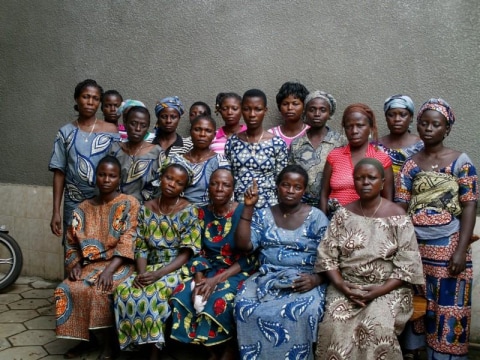 A loan helped to buy manioc and palm nuts.

The FINANGNON group is composed of 19 women who live in the same district. The representative of the group, named Addiffondé is the one with her hand raised in the photo. Addiffondé is 42 years old and lives in Bénin. Addiffondé did not attend school. She is married to a farmer named Rém and lives with her husband and children. Together, the couple meets the various needs of the family. In order to meet different family responsibilities, Addiffondé works in different types of food processing such as turning palm nuts into palm oil and manioc into manioc flour. Addiffondé sells her products in certain regions of Bénin. She gets her supplies in the region. In hopes of meeting the demands of her customers and to increase her turnover and her income, Addiffondé is requesting, along with the other members of the FINANGNON group, a third loan through ALIDé. The previous two loans have been fully repaid.