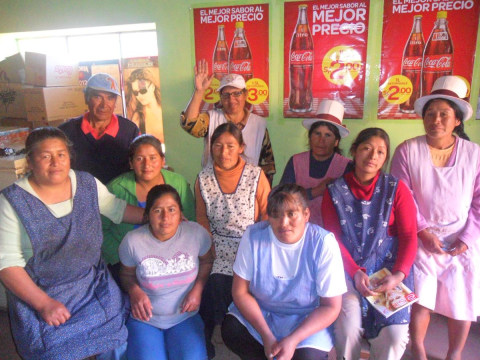 A loan helped to purchase merchandise such as bags of rice, bags of sugar, bottles of milk, and other items.

(Ana Elena is raising her hand in the photo.) Ana Elena lives in the city of Cusco and she sells food from her small grocery store in her home. She has had this business for many years and it is going well. Ana Elena is seeking a loan so that she can buy merchandise such as bags of rice, bags of sugar, bottles of milk, and other items. This group is comprised of neighbors and friends and it is called “Tambopata de Tipon." It is located in the province of Cusco, in the city of Cusco. This group is comprised of people that are always searching for opportunities to get ahead. Every day they strive to make a better future for their children. They do various jobs such as raising animals, running granaries, working in agriculture, selling vegetables, selling food, and preparing typical dishes (such as grilled guinea pig), and more. The group members are thankful for the opportunities given to them and promise to comply with the payment terms as their contracts state. Cusco is located in the district and province of Cusco in the heart of the ancient city of the Incas. It is characterized as a tourist zone because of its archeological center, its historic center, its people, and because of its history. It's an enchanting city in the southern region of the country. Cusco is also known for its traditional Inti Raymi festival and Machu Picchu is known as one of the Seven Wonders of the World.