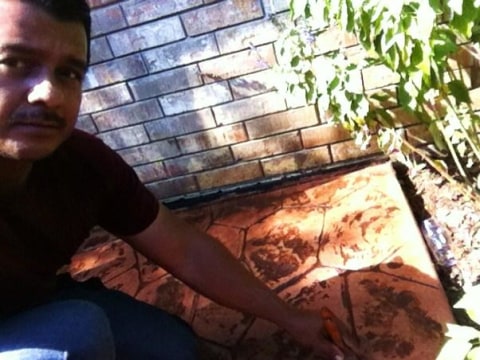 A loan helped to purchase materials for upcoming projects.

Named after the Egyptian bird, which has a symbolic meaning of rising in brilliance, Benu Construction is operated in Fort Worth, Texas by 37-year-old Israel. Specializing in concrete, Israel works only on outdoor projects, such as foundation work, patios and outdoor kitchens. Benu Construction also creates concrete stamps to add décor to residential and commercial buildings. Originally from Mexico, Israel struggled with English when he moved to Texas - which hindered his job search. Since he was unsuccessful in finding a job, Israel said he had to create a job for himself, which led to the creation of his construction company. Depending on the size of the project, Israel employs from one to ten people. He employs two full-time and ten part-time workers. Israel works with the client instead of a general contractor because he does not have enough capital to do that. However, working this way allows for more one-on-one communication between him and his client and brings better results. A returning client, Israel first found out about Accion Texas Inc. four years ago through the Fort Worth Chamber of Commerce, but he didn’t apply for his first loan until he moved to Houston. This is Israel’s third loan. He plans to use it mainly to purchase cedar wood and concrete, but also to obtain concrete dyes and a concrete sealer. The loan will give him job security, Israel said, as he will earn enough capital after his current project to go straight into work on another job. Israel, who is the sole provider for his wife and child, also has a website for his company. Visit it here: benuinc.com or at http://www.concretenetwork.com/contractor/benu-construction-inc-fort-worth-tx_100513.