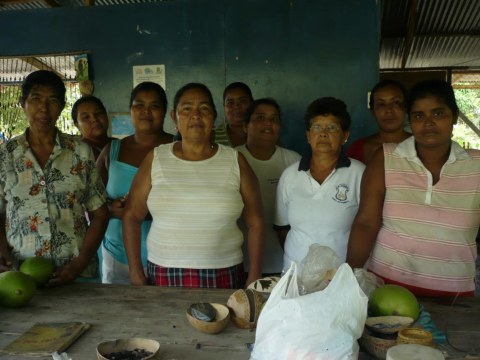 The Women´s Association Of Artisans Of Chira Group

The Women´s Association Of Artisans Of Chira Group's loan finished fundraising, but these other borrowers need your support

A loan helped To purchase materials and tools necessary for the production of arts and crafts.

The Women´s Association Of Artisans Of Chira Group's story

The Women´s Association of Artisans of Chira is a legally recognized entity, which is an association of entrepreneurs that has existed for nine years. The nine women members of this group live and work on the island of Chira, located in the province of Puntarenas, on the pacific coast of Costa Rica. The women know one another on a deep and personal level, having lived in the same community for the majority of their lives. Throughout the group’s existence, the members have received support and instruction from various public and private institutions, including universities and government bodies in charge of economic development. This will be the group´s third loan with Fundación Mujer. During the group´s first and second loan, the members demonstrated their ability to make punctual repayments and work well together as a group. The members of this group have a business producing various arts and crafts that they sell to tourists as well as locals at various fairs and sales events. The women work from 10 am to 4 pm from Monday to Saturday. The work is separated into shifts, allocating some members to production and other members to sales, adjusting to supply and demand as the members see fit. On the production side, members work in their workshop in order to produce jewelry made out of fruit seeds, rock paintings, and gourd crafts (a gourd is called a Jicara in Spanish, a type of inedible fruit, which the women hollow out and paint, as can be seen in the picture). The gourd fruits are cultivated from the land of the members. On the sales side of things, the women have been successful in earning revenues at various fairs and community events. Additionally, the association has secured an agreement with a local hotel owner who gives tours to her guests. One stop on the tour is the workshop of the association, whereby observers can view the artistic production process and purchase hand made arts and crafts. The group members are well aware of the marketing appeal that is generated by having visitors to their workshop; for this reason, one of the groups goals is to use this loan to make improvements to their workplace and make it more presentable, one woman explained, "the workshop is the face of our business." This loan will also be used to invest in work materials and tools, necessary for the production of various arts and crafts, including pliers, ropes, wires, and wood. Adilia Maria E. M. is a 29 year-old single mother who lives with her mother and five children on the island of Chira. Adilia, like the rest of the entrepreneurs in this group, is dedicated to her productive activity. The revenues earned by these hard working women represents a significant portion of family income. The main obstacle the members face is securing a steady market for their products. At the moment, sales are sporadic, in good months, the nine members can earn up to $1,000 as a group, in bad months, only $400. Currently, the group is awaiting the response for an application that has been submitted to the municipality of Puntarenas, which would grant them the right to make sales to tourists on cruise ships. Various cruise ships dock in Puntarenas, and this represents an interesting opportunity for the group to increase their revenues.