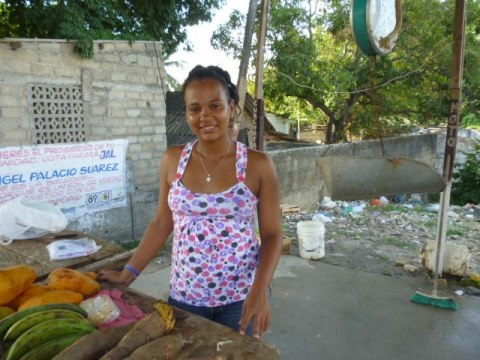 Erika Patricia's loan finished fundraising, but these other borrowers need your support

A loan helped to buy baskets and a table to display the fruits and tubers that she sells, and to expand their variety.

Erika is 26-year-old Cartagena resident who works selling fruit, tubers, and vegetables, and pressure washing motorcycles and taxis in a rented space on the main avenue of the Olaya Herrera neighborhood of her native city. With the loan she is requesting, she hopes to better organize her business by buying baskets for displaying her fruits and a larger, more presentable table than the one she has. She also wants to increase the variety of the products she offers at this time. Erika began working at the shop her mother owned when she was very young; when she established her own household with her life partner and little daughter, she decided to strike out on her own, armed with her great business sense and motivated by a brother who got her the space where her business is currently located. There she started out selling fruit; later, her father (who had taken on running the business because she had gotten a job as a contractor) took advantage of the knowledge he had as a butcher and added the sale of meats to the business. So, with time, the business continued becoming stronger and attracting more customers all the time. But that was not enough for Erika; recognizing that her business was very strategically located, she decided to take advantage of that. She purchased a hydraulic pump and began offering a vehicle washing service, which has been very well received and successful so far. Erika has her family's help in staffing her business; for that reason, her biggest dream is to continue growing and eventually have a large store that can accommodate everyone and earn greater profits to improve her and her family's quality of life.