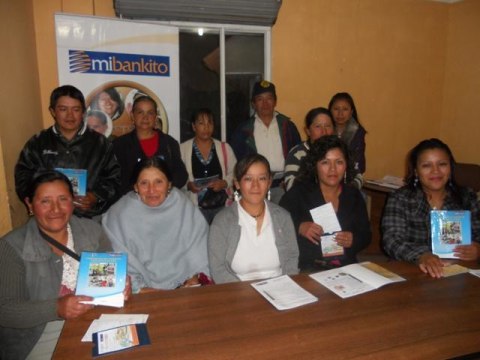 A loan helped to purchase chickens and feed for her animals.

The communal bank Victoria del Portete consists of nine women and two men. They work in different businesses, such as agriculture and commerce, which allow them to have economic independence and provide financial support for their homes. The members are friendly, courteous, and charismatic people who still maintain their people's culture and traditions. They live in the Victoria del Portete parish in Cuenca, which is a place with a cold climate that has large prairies favorable for livestock, as well as many places to enjoy the natural environment. One of the members of the group is Sofia, who is thirty-two years old. She is married with three children, ages thirteen, nine, and four. Her first child is in school, and her second child is in a city school. Her husband works as a day-laborer. They do not have their own home, so they rent. Sofia does chores in her home. She spends the majority of her time with her children and family, but to support her home financially she also raises guinea pigs and chickens, which she sells in her community. This is her second loan with the communal bank, and she will invest it by purchasing chickens and feed for her animals. Her dream is purchase some land.